When I was a kid… 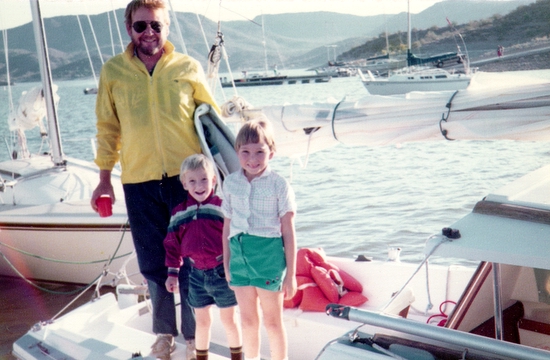 I ran across this photo today which must be from the mid 80s. That’s me in the middle with my dad and sister. I’m pretty sure we’re at Lake Pleasant in AZ.

I just got back from a weekend playing Tron. I mean, sailing.

I only saw the movie Tron (1982) for the first time a few years ago. I’m sure it’s famous for only one reason: it was the first movie to use computer generated graphics. I certainly don’t remember it for the great script.

This weekend while sailing at the lake I was reminded of the Tron movie when I watched how the boats crossed paths like they do in the Tron race scene. Everything happens at sharp angles in sailing as you have to work your way at a beat, a reach, or a run to wherever you want to go. In this case, it was a race, so we all had the same goal — to get to the finish line!

All of the boats pretty much go in the same direction except when one boat wants to cut across and get to another part of the lake. Often to find better wind or to see if their path is faster.

In sailing you can’t sail directly into the wind, and just like in Tron you have to make multiple criss crossing paths until you reach your next waypoint. When two boats intersect it can be an interesting situation and you can have some close calls. Unlike Tron, there are rules that govern these situations and nobody dies. Whoever is on “starboard” has the right of way in sailing (and that’s always one boat, never two).

So there you go. A scientific analysis of the similarities between Tron and sailing!

It occurred to me this evening as I was eating dinner out with my parents that a fun question to ask would be “what was your favorite breakfast, lunch, and dinner last year?”

I was specifically thinking of food you ate at restaurants, but if you cooked your favorite meal at home then more power to you.

Best Dinner – Not surprisingly, most of mine were times we ate out in Vancouver (my only vacation last year). I voted for my best dinner at The Sandbar Restaurant as the best of the year. We had a really great view of the bay and the food was just terrific. I had this seafood bouillabaisse with all kinds of tasty ingredients in a sort of soup with curry. The menu describes it like this: Sandbar Hot Pot seasonal fish, thai curry, coconut milk. Mmmmmm, it was really good.

Best Lunch – Then for best lunch I voted for this one lunch we had about an hour north of Seattle (I can’t remember where exactly). We were waiting to get on the ferry and we had an hour to burn and we were hungry. We were sitting by the window overlooking Puget Sound and we could see cars waiting to load on the ferry. Since we had just flown out from Phoenix we were enjoying the great weather (think 30 degree difference).

My lunch consisted of this shrimp and artichoke sandwich and a tasty bowl of chowder. It doesn’t sound too interesting and maybe it wasn’t but the fact that I was starving, the great view overlooking the bay, and the food was really good made it my favorite lunch of the year.

Best Breakfast – This is easy because I’m a horrible breakfast eater. As a result I’ve eaten less breakfasts, so less to weed out. We ate at this one place in Anacortes, Washington called Calico Cupboard Old Town Cafe. Perhaps the food was good because we had been sailing for a few days prior and we were hungry. But it was really quite good. We later learned that the cafe is actually a chain but you would never guess. I’d call it a cross between a Mimi’s Cafe and The Breakfast Club in Scottsdale — but with much less sophistication. All good stuff.

There were a number of memorable meals at home and especially on holidays. I think the reason meals out are sometimes more interesting is because the ingredients are different from what you would typically have in your own home (who has curry or coconut milk?).

Hmmm, now I need to think about the best cup of coffee. That will be a difficult one.

Predictions for 2006 – I’m betting that I’ll enjoy some great food in Brazil this May. I’ve already enjoyed a few good meals out this year including one good dinner at a Brazilian steakhouse called Rio Sabor Brazil in Scottsdale where we had 11 different kinds of meat and some fish and shrimp all in one sitting.

Why taking pictures with a flash is better

BAMM! That’s the thought that goes through my head when I take pictures with my external flash attached. It’s like I’m firing a lightning bolt. Within my fingers I control an instrument that fires a burst of light on my subjects and captures amazing pictures.

Occasionally I find myself at a party without my external flash and I just know my pictures will be less dynamic and lack that great lighting I like to capture. With the external flash however. I can turn ordinary pictures into great pictures.

You want to know one of the biggest secrets to taking great photos? Use an external flash and get a good camera. Beyond that it’s just taking a lot of photos and not showing people all of the bad ones. Of course, when you’re like me all of your shots are great. Except the ones of my lens cap.

Chris is a walking password index. He can remember login information for virtually any site he has worked on in the past 5 years.

His expertise lies in Ancient Egypt. Specifically he has amassed a wealth of knowledge about Ancient Egyptian Monarchies (just in case he’s ever asked to be on Jeopardy).